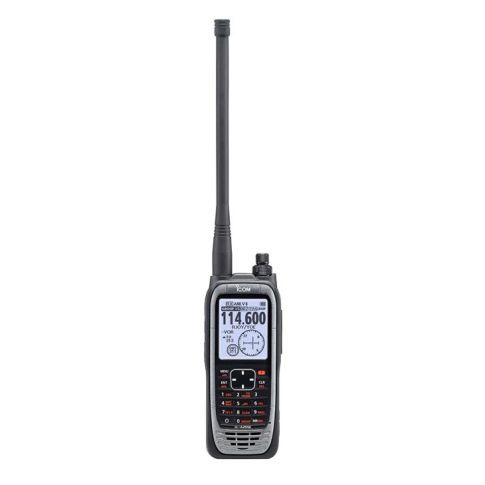 0 in your basket
View Basket Checkout

Often used functions are assigned to the ten-key pad and you can directly access the desired function. The enlarged flat sheet keypad offers smooth and swift operation.

The large, high contrast and highly visible LCD display user-friendly, graphic screens and ensures good readability under sunlight. The operating frequency in large characters can be recognized at a glance. Also, the night mode option allows for easy viewing in low light conditions.

The IC-A25NE stores the last ten channels used. You can easily recall those channels by using the directional keys or the channel knob or the keypad. This is convenient for switching between several channels, such as NAV and COM channels. You can also freely edit (replace, delete, and change order) the stored recall channels.

The supplied BP-288, 2350 mAh typical intelligent battery pack, provides up to 10.5 hours* of operating time. You can check the condition of the battery pack in the battery status screen. This is very useful for optimum charging and battery health maintenance.

The CDI (Course Deviation Indicator) is detailed like a real VOR instrument; showing any deviation from your course.

The OBS (Omni Bearing Selector) allows you to change course from the original flight plan. The TO-FROM indicator shows the position relationship between your aircraft and the course selected by the OBS.

The ABSS (Automatic Bearing Set System) function enables you to set the current course or a new course in two simple steps.

The simplified waypoint NAV guides you to a destination by using current position information from GPS (also GLONASS and SBAS). The waypoint NAV has two functions: Direct-To NAV and Flight Plan NAV. Up to 10 Flight Plans and 300 waypoints can be memorised in the IC-A25NE.

Using RS-AERO1A (Android app) or RS-AERO1I (iOS app), you can make a flight plan on an Android/iOS device and import the plan to the IC-A25NE via Bluetooth. The following four functions are available:

You can make flight plans on an Android/iOS device by using preprogrammed waypoints in the IC-A25NE.

You can pick up a point on the map and export it to the IC-A25NE for Direct-To NAV.

A flight plan in the IC-A25NE can be displayed on an Android/iOS device.

Preprogrammed waypoints in the IC-A25NE can be exported to an Android/iOS device and plotted on the map application.

Recommend this to a friend  +